Hello, friends, and welcome back to another season of Em oi! I believe this is the ninth now, or it will be as soon as I learn how to draw again. So much has happened during my little sabbatical. I do appreciate everyone’s patience with my lack of comic production–during the more stressful parts of the summer, I wasn’t feeling especially funny, and the time off has helped a lot. The summer also included:

Which brings us to this comic, because seven years ago this past September 6th, I went on my first date with B. A month later, only a day or two after the marathon, we went over to a local athletic club and got a joint membership, and he started teaching me to lift weights. So what is depicted in the comic has basically been my life ever since.

Maybe if I get some time I will write down my advice for weight lifting, because I have been doing it for a while now. Or maybe if you’re interested in that I’ll just let you google for it.

So in answer to all of my anxiety dreams last night, my novella has been published! Yay!

Now you’re asking, “Emily, where can I buy this marvelous thing?” Glad you asked. Check out these links:

But that’s not all. I know some people like to get their books signed, and this is difficult with an e-book. So if you bought the book (and enjoyed it, I guess? Otherwise what’s the point?), send me an email to ehlupton+postcards(AT)gmail(DOT)com (yes, that is my name, ehlupton, the plus sign, the word “postcards,” and then gmail dot com). Include your name and snail mail address, and I will send you a postcard with the book’s gorgeous cover on it. I’ll write a message, if you want one, or draw a picture of a dog (probably of my dog), even sign it. If you’re extra obsessive, like me, let me know and I’ll mail it to you in an envelop so it doesn’t get cancelled or otherwise undergo the rigors of the postal service.

Please note on the postcards: I probably won’t get the order before the end of next week, so I can’t guarantee I’ll be able to get youthe postcard by mail before Christmas unless you live locally. If you buy the book, you will get it delivered electronically in less than five minutes, so that will have to fulfill your desires for instant gratification for the nonce.

Anyway, I hope you enjoy it! I hope, if you really enjoyed it, that you will consider reviewing it, or recommending it to your friends. But even if you don’t do those things, I am glad that you took a little time to read it. Thank you.

Edgar came to live with us close to four weeks ago. I think it will be four weeks tomorrow, actually. It’s actually surprising how much about him has changed since we brought him home:

At first Edgar was very shy and stayed in his crate most of the time, even though we left the door open so he could come and go as he wanted. I think he appreciated having the little cave to hang out in, because re-homing is incredibly stressful and confusing. And that’s for people; imagine how the dogs feel. Anyway, Edgar is a rescue dog and he had spent a lot of his life in to a shelter before entering the foster care system and then coming to us, so we knew that it would take him longer than it took Maya to warm up to us. After all, Maya was 12 weeks when we got her, versus Edgar at six or seven months–much more life to have traumatized him thus far. However, I am happy to report that he is thriving. I drew this follow-up comic to demonstrate Edgar hanging out in the atrium every morning while I eat breakfast:

I’ll file this comic under SF427 .L86 2013 for Animal Culture–Pets–Dogs–Culture and care. Sadly, there was no entry for “doggy personal ads.”

And here’s a photograph of him I took earlier this afternoon: 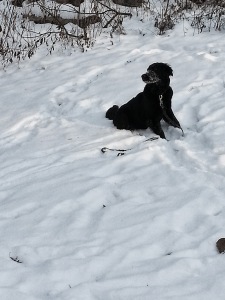 And a picture of Edgar and Maya playing in the snow:

So the reason we were able to get another dog is that we recently moved to a new house. I think I may have mentioned this before. But the thing is that we have been slowly going through a lot of stuff at the old condo that didn’t get moved, stuff that we should probably throw away so we can get the house on the market. Earlier this evening while doing this, I came across this piece of paper:

If you can’t read, it says, “ทำงานทุกวันและเล่นไม่ได้ทำให้คุณจากคนไม่สนใจ,” which translates as “Working everyday and not playing makes Jack an uninteresting person.” Nowadays I would spell “Jack” as “แจก” rather than “จาก” I guess. But. I wonder what was going on when I made those notes? It also seems to say “Liz Bernstein–another Jew in Asia,” “มหา [maha] Ghosanada,” “CompLit,” and “No one is soverign [sic] in love.”

I should mention that the novella is due out at the end of the week. It will be available as a PDF and on all major ebook platforms (i.e., Kindle and Nook). So, uh, prepare to spend money on it? It should be pretty awesome. Here, in case you haven’t seen it yet, is the cover.