I wanted to get these up here before Passover ended and they became irrelevant for another year.

I have been toying with the idea of drawing comics to submit for publication (not in a newspaper, but maybe in a well-known national magazine), and if I had gotten some of these drawn a few months ago, maybe I would have sent them (well, potentially one of the three). But I didn’t. So whatever.

I should explain that we often substitute a carrot for a shank bone because we have never been able to successfully figure out where to get a shank bone. Also, um, gross. The hardboiled egg is actually supposed to be a roasted egg, but…I don’t know how to roast an egg. I had to look up how to hardboil one.

This last comic is part of a (now) long-running joke between B and I that began somehow when I took a boot over to a local place called Cecil’s Shoe Repair. I cannot explain more than that because like so many things, I don’t really understand what has happened. But if you need your boot fixed, I recommend Cecil’s.

* “Pareve” means something that, according to the laws of kashrut, can be eaten with both meat and milk dishes. Usually it can be thought of as vegetarian, but that’s not always the case–for example, gelatin and rennent are both considered pareve (because they are too far removed from the animals to really be animal products by kosher standards) but they are strictly speaking not vegetarian. Also fish are considered pareve. I don’t really understand why, but hey, I’m not a mashgiach.

What else. Oy. I have had a really hard week. I’ll say it. And yeah, I know people who are having actual hard weeks, and I feel really bad using language that might equate my life with theirs, as if having to go to Walgreens at 9pm to buy extra half-price Easter candy were really “difficult” in some way. 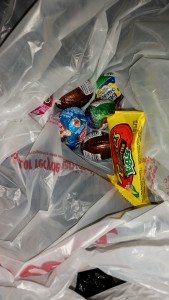 But I do feel just…ground down, unable to concentrate, tired, distracted…part of it is that I am a mammal, and I guess I need to actually take sleeping seriously instead of EVERY NIGHT setting my alarm for six hours after I go to bed, as if somehow I will suddenly (re)manifest the ability to get out of bed at that hour, which happens to be my current strategy. Then I lie in bed for an hour questioning my life choices. It’s fun.

I have been upping my mileage running, and also eating a lot of matzo**, which is lower in calories than my usual breakfast, so that might account for the low energy as well. (Although I have been also upping my Easter candy consumption.) We’ve also had a parade of contractors through our house as we prepare to fix some insulation issues, and then on Tuesday during the first rainstorm of the year, a window suddenly began leaking. We relatively quickly found the source of the problem and kludged together a repair (okay, B climbed a ladder [during a storm–eek] and pushed the flashing back into place). Since then it has continued to rain, meaning that it hasn’t really had a chance to dry out so we can fix it permanently. Also, B is having knee surgery next week, and I’m nervous about it. More nervous than he is, actually.

Okay, I’m pretty tired and I still have to take the dogs out so I’m going to wrap this up. Happy Passover to those who celebrate it, Happy Easter to those who celebrate it, and also Happy Ostara, and any other holidays I’m missing that might have happened. Happy National Poetry Month too. My favorite poem used to be “The Love Song of J. Alfred Prufrock,” but I’ve been getting a lot of rejection letters lately and it’s becoming harder to keep an ironic distance from the narrator. So, uh, let’s go with “Personal Ruin” by Claire Wahmanholm, which is in some respects on a similar theme but a lot more hip. What’s your favorite poem?

** I accidentally for various reasons bought five pounds of matzo. As of right now, one week from the first night Seder, I have eaten…one box (one pound). That’s with the people at the Seder helping me, and also with a friend coming over and eating some.